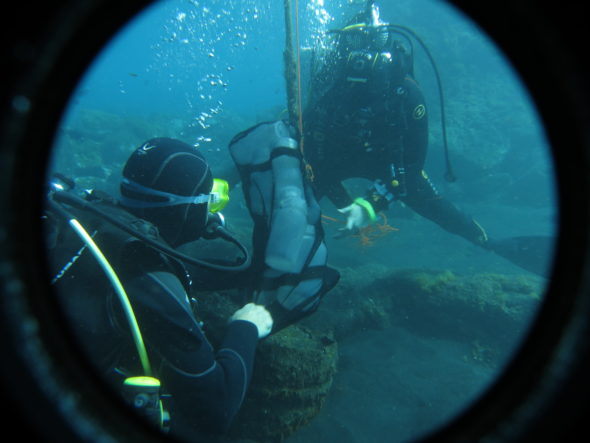 Covering about 70% of the Earth’s surface, the world’s oceans are seen as an important marker of climate change, with rising sea temperatures and acidity today a cause of increasing concern.

Life on earth has been close to extinction at least five times in the last 500 million years, and in most cases, the secret to these catastrophic events lies in the oceans. How did the sea, which normally sustains life, become life-threatening at certain times? And why did some species survive?

As we look for solutions to tackle the spiralling pace of climate change, could some of the answers lie in our planet’s deepest history? Could fossils more than 500 million years old help us understand and better predict the current state of our environment? This is the challenge set by a network of 15 young researchers, among them eight women, and senior scientists, stakeholders and industrial partners coming from eight European countries (Austria, Poland, France, Slovak Republic, Italy, Denmark, Germany, Czech Republic), from Israel, from Canada and Australia, set up with the support of European Union funding, and searching deep into the past to unlock the secrets of the future.

Running from 2015-2018, the BASE-LiNE Earth project is coordinated at the GEOMAR Helmholtz Centre for Ocean Research Kiel, Germany, and is funded by the EU’s Marie Skłodowska-Curie action as part of its HORIZON 2020 research and innovation programme.

“If historians want to get insights into what happened 100 or 200 years ago they visit libraries or archives, in which written evidence of these times can be found,” says project coordinator Professor Anton Eisenhauer from GEOMAR. “We also use archives. But they look somewhat different. We use calcite shells of fossil brachiopods, for example, in which the chemical history of ocean water is reliably stored.”

Brachiopod fossils have preserved traces of changes in the marine environment from which scientists can decode information dating back millions of years. “We can use the fossil brachiopods to reconstruct the ancient ocean pH,” says Hana Jurikova, one of the fellows of the project, who is studying at GEOMAR. “They can tell us things like temperature, acidity of the water, where the currents were coming from, the depth of where the animal was living,” adds Marco Romanin, another of the 15 young scientists in the network, conducting his research at the Polish Academy of Sciences in Warsaw.

The network has given the 15 fellows the opportunity to study at Europe’s most advanced centres of research, while also putting them in contact with non-academic high-tech institutions partnering the project in eight European countries, introducing them to cutting edge analytical instrumentation and techniques that will put them at the forefront of their field.

The project is also investigating the composition of the brachiopod shells, an extraordinary hybrid composite of organic molecules and mineral substance that combines flexibility and strength, and allowed their survival through periods of mass extinction. Understanding the construction of such a shell could have real-life applications in areas like construction or the airline industry.

But decoding the lessons of the past could be the project’s most important contribution, as the network feeds data extracted from the fossils into models that show to what extent earlier environmental changes might be compared to the present.

We already know, for example, that during the biggest mass extinction 251 million years ago the ocean did not contain oxygen and was acidified in large parts. “This is similar to some of the scenarios that we expect for the future,” warns Professor Eisenhauer.