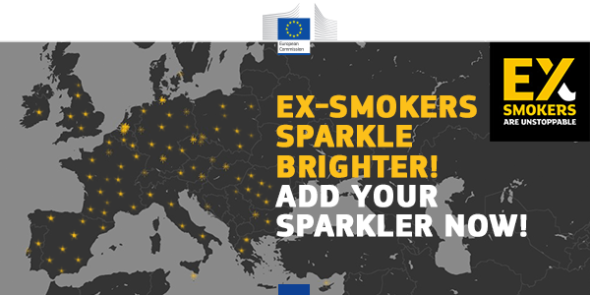 Brussels, October 26 – Since 2011 the ‘Ex-Smokers are Unstoppable’ campaign has helped young people give up tobacco, by promoting the many benefits of a smoke-free life: better health and well-being, more disposable income and ultimately a better quality of life.

In the run up to October 30th 2015, ex-smokers and iCoach users can celebrate their achievement by lighting a sparkler on a digital map of Europe. They may also use the map to encourage a loved one to also quit the habit. The final map of Europe with all the sparklers will be revealed in Brussels on October 30th by Health and Food Safety Commissioner, Vytenis Andriukaitis.

“As a heart surgeon I have seen first-hand the terrible effects of tobacco use. I also lost two of my brothers to tobacco-related diseases. I will never forget the pain they went through. Tobacco is responsible for nearly 700 000 avoidable deaths in the EU every year. A rigorous tobacco control policy, supported by awareness-raising initiatives such as ‘Ex-smokers are Unstoppable’, is vital for improving public health in the EU. Giving up smoking is an achievement to be proud of, an achievement which can change your life. Today we celebrate thousands of ex-smokers who shine bright across Europe. I congratulate them all – they are an inspiration to those who are still struggling to quit” said Commissioner Vytenis Andriukaitis.

The 2015 edition of iCoach launched in February has already clocked up 26,296 new registered users of this free digital health coach. Since its launch in 2011, 36% of iCoach users claim to have quit smoking within 3 months. In addition to the health benefits, this translates into collective savings of over € 2,6 million.

“It is essential to quit smoking to avoid the onset of chronic obstructive pulmonary disease (COPD), a severe lung condition that is manageable but not curable. Stopping smoking is also the number one treatment for those suffering from COPD; it should be encouraged and supported, irrespective of the age or number of years of smoking. We welcome this initiative and trust it will contribute to halt the development of COPD which, otherwise, is set to become the 3rd leading cause of death worldwide by 2030, according to WHO”.

Commenting on the campaign, Professor Carlos Jimenez-Ruiz, Chair of the Tobacco Control Committee of the European Respiratory Society, said “Combined with effecting smoking-cessation campaigns like ‘Ex-smokers are unstoppable’, are essential for reducing smoking-related deaths in Europe”.