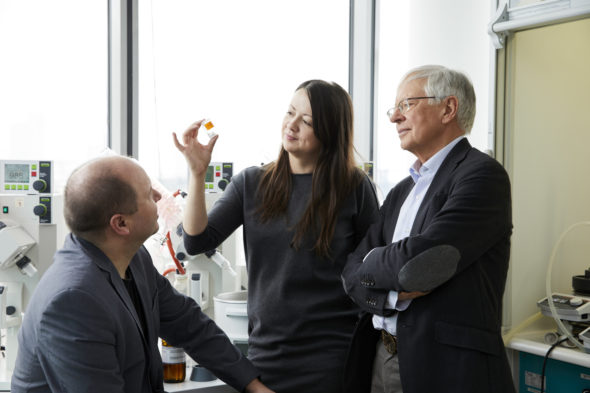 To truly personalise medicine and ensure its maximum effectiveness, treatments need to be tailored to individual patients and their specific conditions on a molecular level as well. This is the objective behind the work of Polish scientists Jacek Jemielity, Joanna Kowalska, Edward Darżynkiewicz and their team. They have developed a robust, more effective and easy-to-produce “cap” for the molecules which convey instructions within a cell on what proteins to produce, the mRNA. The scientists’ technique opens up possibilities for medical approaches that make corrections to the body’s genetic messaging system without directly altering a patient’s DNA.

For their achievements, Jemielity, Kowalska, Darżynkiewicz and a team of scientists from the University of Warsaw have been nominated as finalists for the European Inventor Award 2018 in the category “Research”. The winners of this year’s edition of the EPO’s annual innovation prize will be announced at a ceremony in Paris, Saint-Germain-en-Laye, on 7 June 2018.

“The approach adopted by the Polish researchers has the potential to widen the scope of personalised medicines using molecular biology,” said EPO President Benoît Battistelli, announcing the European Inventor Award 2018 finalists. “They demonstrate how European medical research is helping open up new approaches to treating cancer and other deadly illnesses that could potentially benefit millions of people.”

A personal touch to personalised medicine

For bioorganic chemist Jacek Jemielity at the University of Warsaw (UW) the quest to develop new methods for treating diseases such as cancer strikes particularly close to home: While his team was in the process of researching ways to create more stable, chemically-modified mRNA as a possible vehicle for therapies, his daughter fell ill with leukaemia. “I spent a great deal of time in the hospital where I saw many children fighting for their lives,” Jemielity relates. “Her illness was a tremendously important motivation for my work.”

While the Polish researcher’s daughter has made a full recovery, there are over ten million new cases of various forms of cancer per year around the globe. Combined, they constitute the second leading cause of death worldwide. Standard treatments such as surgery, radiation therapy and chemotherapy have made significant advances. However, projections that two out of every five people can now expect to get cancer in their lifetime, and the resulting costs in terms of economic burdens and human lives, have made research into novel approaches to cancer treatment one of medicine’s top priorities.

A promising avenue for cancer treatment lies in the field of personalised medicine, where therapies are based on a patient’s own DNA. The aim of these treatments is to tackle the gene-based root of the illness by locating the specific parts of the DNA that causes it, or finding the genetic mutations that are responsible for the abnormal cell growth typical of cancer.

A new approach to modifying mRNA

Human DNA has an estimated twenty thousand genes that provide the instructions for building the proteins, enzymes and other molecules that make up the human body. Until now, altering it has proved so costly, difficult and risky that only a handful of gene therapies have been approved to date. These therapies typically rely on modified retroviruses that can slip past the cell’s defences and implant the new information directly into a cell’s nucleus.

A far less invasive approach is to focus on the way in which DNA’s information is passed to the cell’s ribosomes, where its instructions to produce proteins are carried out.  Specific molecules called messenger RNA (mRNA) convey the DNA’s instructions to these protein factories. Because mRNA is by its very nature short lived, the human body’s enzymes and proteins would most often break down any modified, externally-introduced mRNA before it was able to relay therapeutic information to the ribosome. 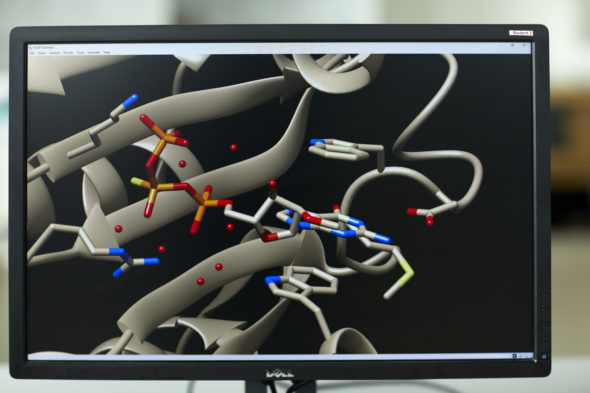 Based on research going back nearly four decades, Jemielity and his team took a different approach concentrating on the particularly fragile ends of mRNA by capping them artificially with what is called 5′ (five prime) caps.  “The cap structure is very important for the metabolism of the mRNA,” Jemielity explains. “mRNA with no cap structure decomposes very rapidly and cannot perform its function. The cap, therefore, protects the mRNA from being degraded.”

The team’s solution was to alter one of the roughly 80 000 atoms in a typical mRNA molecule by replacing a single atom of oxygen with a sulphur atom, thus creating a synthetic cap for mRNA that took the place of the naturally occurring one. Their patented approach – which they dubbed Beta-S-ARCA – created stable mRNA that was five times more effective and lasted three times longer within a cell than the natural molecule, opening the door for mRNA-based therapeutics.

From lab to market

After filing for European patents in 2008, the team formed a business partnership with BioNTech, a University of Mainz (Germany) spin-off company that specialises in gene therapies. Initial clinical trials of therapies using mRNA caps developed by the UW team began two years later, and BioNTech went on to license the stable mRNA technology to major pharmaceutical companies, including French multinational Sanofi S.A. (in 2015) and Genentech Inc (in 2016). In July 2017, BioNTech released promising results from the first human trials of an mRNA-based individualised cancer vaccine, which uses the Beta-S-ARCA caps invented by Jemielity and his team: Eight of the 13 participating patients suffering from repeated relapses of melanoma cancer remained completely tumour free during the 23-month testing period. Of the five others who experienced new tumours, one exhibited shrinkage of the cancer growth.

The tested vaccine, which may be adapted for other cancers, relies on DNA sequencing of a patient’s tumour and cross-comparison of its DNA to that of healthy tissue. After mutations are identified, artificially altered mRNA is injected into the patient, allowing the body’s immune system to identify and destroy cancer cells. BioNTech plans to test the technology in combination with an anti-cancer drug, Tecentriq.

Despite the long hours they log in at the lab the Polish scientists maintain a joyful camaraderie, which clearly motivates them to build on their ground-breaking research. As early as the 1980s, UW was far ahead of its peers researching mRNA stabilisation long before it was recognised as potential building block for life-saving therapeutics.

The senior member of the team, Edward Darżynkiewicz, received his master’s degree and doctorate in organic chemistry from UW in 1970 and 1976 respectively, and has served as full professor in physics there since 2009. He heads the Gene Expression Laboratory in UW’s Division of Physics, as well as the Interdisciplinary Laboratory of Molecular Biology and Biophysics in its Centre of New Technologies. In 2015, he was awarded the Leon Marchlewski Medal for outstanding achievements in the field of biochemistry and biophysics. He has co-authored 208 scientific publications, three European patents and one US patent.

Jacek Jemielity has served as professor of bioorganic chemistry at the Centre of New Technologies, UW, since 2013, and now heads the Laboratory of Bioorganic Chemistry there. He is the author of three European patents and nearly 100 scientific publications. He has been honoured with the UW Rector’s Award for scientific achievements and the Faculty of Physics UW Award.

Joanna Kowalska has been assistant professor on the Faculty of Physics, Division of Biophysics, UW, since 2011. She currently also serves as project leader. She has authored more than 50 scientific works and three European patents. She has received the UW Rector’s Second Degree Award, the Faculty of Physics UW Award, and the Prof. Pieńkowski Award.

Jemielity, Kowalska, Darżynkiewicz and their team were awarded the Economic Award of the President of Poland in 2017 in the category “Research & Development” for their inventions.