The Optix consortium has successfully developed and tested a portable prototype capable of detecting extremely small quantities of explosives at a 20-metre distance, providing police and security forces with an invaluable asset in the fight against bomb attacks. No other research organisation or company has to date achieved similar results which places the European industry in an unprecedented position to bring the technology to market. The Optix consortium has received € 2.4 million in funding from the EU Commission and is led by Spanish consultancy and technology multinational Indra.

“The standoff detection of traces of explosives would increase security in every scenario. Not only would security be enhanced, but the inconvenience for citizens would be reduced significantly through the use of a non-invasive and non-hazardous explosive detection system,” explains Alberto Calvo, Security Director at Indra.

The system makes use of advanced optic technology. Thanks to lasers that can precisely identify the molecular structure of explosive artifacts, the device can rapidly and remotely scan the object in question, such as a vehicle, piece of luggage or any opaque container, and pick up trace residue. It is virtually impossible to handle explosives and transport them without leaving a trace: residue adheres to the surface of the objects that transport them, as well as the hands of the people who handle them and whatever they touch. 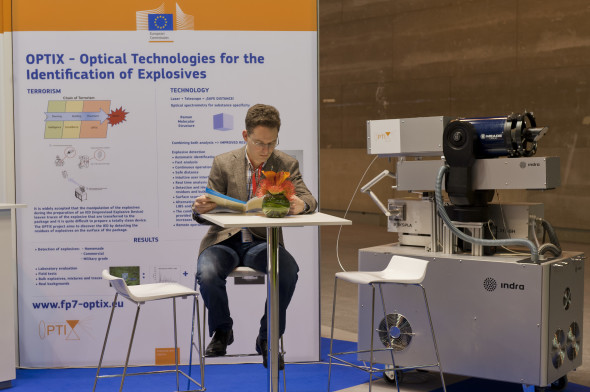 To make the system portable, it will be integrated into a wheeled platform that can be transported in a standard-sized van to the area to be patrolled. The platform will move along a car park or a street, for example, scanning surfaces where traces may be present, such as on the steering wheel or the door of a vehicle. A law enforcement officer will control the platform remotely from a portable ruggedised lab-computer on which he or she will directly receive the results obtained by the Optix detection system.

The Optix prototype has already been successfully tested in laboratory and outdoor environments, simulated real-life situations and in various weather conditions. Further trials are planned to increase the sensitivity, precision and robustness of the system before making it available to European police and security forces. Commercialisation of the system would have the dual benefit of improving the security of citizens and the competitiveness of Europe’s industry, making the continent less reliant on imported technology.

In addition to its application in the field of remote detection of explosives, the laser technology developed by the Optix consortium shows interesting capabilities in other areas, in particular the field of forensic investigations.

To guarantee the programme’s success, an effort has been made to actively involve end users, European forces and security bodies specialised in detecting and neutralising explosive artifacts. Sessions have therefore been organised with experts from the Guardia Civil (Spain National Police), Mossos de D´ Esquadra (Catalan Police), Ertzaintza (Basque Police), as well as Police Forces from Romania, Poland and Italy to show them the technology and its possibilities.

Optix is one of many security projects receiving support through European Union R&D programmes.

About the Optix Consortium

The Optix Project has focused on the development and combined use of two technologies for explosives detection:

As part of the project research, results were also obtained on the application of Spatial Offset Raman spectroscopy. This variant of Raman spectroscopy allows highly accurate chemical analysis of objects beneath obscuring surfaces, thereby enabling the standoff identification of explosives inside opaque containers.