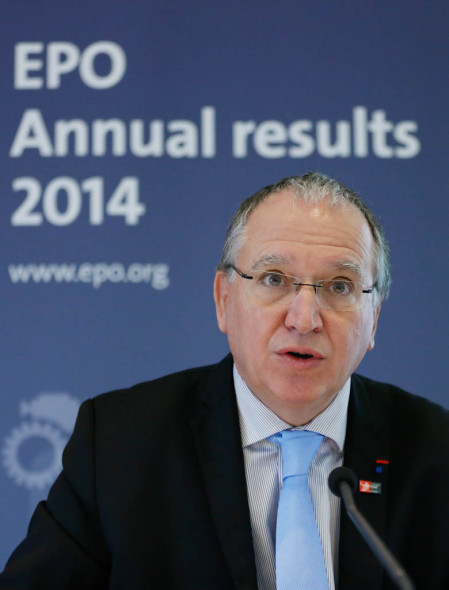 Patent filings at the European Patent Office (EPO) grew again in 2014 to 274 000 (+3.1%), reaching a new record level. Companies from Poland filed 701 patents, a steep increase of +22% over the previous year, making Poland one of the fastest growing countries in terms of patent filings (exceeding the 18% growth of China). Since 2010 the number of patent filings from Poland has more than doubled (2010: 343 applications).

“Demand for patent protection in Europe has been growing steadily, and is up for the fifth year in a row,” says EPO President Benoȋt Battistelli. “Europe continues to strengthen its key role as a global hub of technology and innovation for a growing number of companies from around the world. The rise in patent filings originating from Europe underlines the importance of patent-intensive industries as a solid base for the European knowledge economy: They foster Europe’s competitiveness, economic strength and employment.”

With Akademia Gorniczo-Hutnicza being the 3rd largest patent applicant at the EPO from Poland, a university was high in the rankings of Polish applicants in 2014. Patents Factory Ltd. sp. z o.o. was Poland’s No. 1 applicant and International Tobacco Machinery Poland sp. z o.o. No. 2.

Looking at European patent applications per million inhabitants, Poland, with 12 (up from 10 in the previous year), ranked 28th, up from 30th place previously, just behind the Czech Republic (27th) and ahead of Hungary (30th) and Portugal (32nd) but below the EU-28 average of 131 applications/million inhabitants.

Regional differences in Europe, strong growth from China and US

Samsung once again headed the list of top applicants at the EPO with 2 541 applications in 2014. European companies maintained their strong presence among the leading companies in terms of applications filed, with five firms in the top ten. No. 2 was Philips, followed by Siemens (3rd), BASF (6th), Robert Bosch (8th) and Ericsson (9th). With Huawei in 5th, a Chinese company entered the EPO’s top ten for the second time ever (ZTE was 10th in 2012). The US firms Qualcomm (7th) and Intel (10th) rounded out the top ten.

For detailed statistics, and a report on activities in 2014, see the EPO’s online annual report at: www.epo.org/annual-report2014