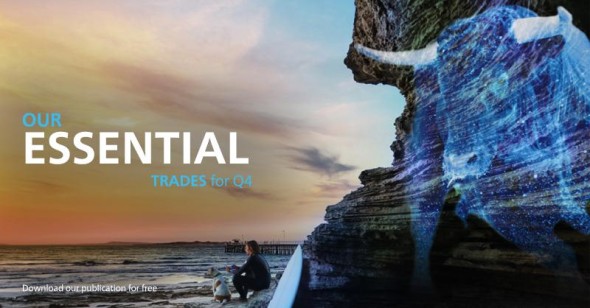 The plunge in the price of oil and other commodities has scores of emerging markets under severe pressure. And yet, it is in emerging markets that Saxo Bank sees most hope. As risks to global growth increase, the timing of a US interest rate move remains a shadow over such economies, but the very volatility this engenders creates its own trading opportunities.

Emerging markets have been battered by a debt-induced perfect storm, a dizzy US dollar and crumbling commodities prices. However, according to Saxo Bank’s Essential Trades for Q4, there is hope – and investment opportunities ­– even though the pretend-and-extend cycle of denial persists.

Saxo Bank Chief Economist Steen Jakobsen, says: “The “pretend-and-extend” policy triggered a negative vicious cycle whereby EM-issued, dollar-denominated debt was converted into local currencies. Then, the stronger dollar increased both the debt burden and lowered commodity prices, a main export for many EMs. In turn, this meant less demand and less growth for EM. This happened in a world economy based on fiat money, dollar reserves, dollar-denominated commodities and debt and a rising US dollar. It’s no wonder that world growth is falling dramatically – the only surprise is that policymakers seem surprised,” added Jakobsen.

“The perfect storm raging through emerging markets is also the biggest opportunity in decades.”

Steen Jakobsen believes the way to play this is via FX trades because of liquidity and access issues. Many EMs are not deep enough to cater for robust equity markets. Additionally, academic studies show more than 80% of all returns in EM come from FX and not from owning bonds and stocks. That said, Steen Jakobsen thinks EM overall are a buy. Steen Jakobsen believes the fact that we are in the midst of a perfect storm should not fool us into believing “the sun will never shine again”.

Saxo Bank key trading ideas for the next quarter are:

Commodities spent most of September stabilising after several raw materials, such as industrial metals, hit levels not seen since the beginning of the millennium. Rising supplies of key commodities from metals to energy and crops continued to play havoc with those EM countries whose prosperity depends on exports of raw materials.

Saxo Bank’s Ole Hansen expects that as we enter the final quarter of 2015, we will see light at the end of the tunnel for commodities assuming that supply is reduced. But if demand fails to keep up, the tunnel could grow even longer, leaving only a glimmer of hope.

Mads Koefoed, Head of Macro at Saxo Bank says the long-awaited Federal Reserve rate hike will be the landmark fourth macro event. Emerging markets, however, remain a factor as the extreme weakness seen after the late-summer withdrawal of risk appetite may well prove overdone.

Head of Saxo Bank’s FX Strategy, John Hardy, believes September’s Federal Reserve decision signalled that Fed policy is global policy, and particularly so for emerging markets. Although Q4 could see risk appetite-related rebounds in currencies like the RUB, BRL, TRY, and ZAR, a more conservative approach would look elsewhere – to Mexico and to Poland, for example.

Saxo Bank’s Head of Fixed Income Trading Simon Fasdal says fear infected markets during Q3 and remains a force to be reckoned with as we stand on the cusp of Q4.

Fasdal argues that emerging markets are where the road to opportunity begins. Firstly, the overall rotation away from emerging market assets has increased the yield difference between developed markets and emerging markets significantly. Secondly, the lack of growth is playing too big a factor.

Saxo Bank’s Asia Macro Strategist Kay Van-Petersen argues that although many feel the sell-off in emerging markets is overdone and we have seen the lows, he begs to differ. The cheap money that came out of the Fed’s quantitative easing, as well as China’s massive stimulus during the financial crisis, has inflated assets heavily. Global growth is decelerating, commodities have yet to find a floor, and EM assets have yet to catch up with the continuing deterioration of macro fundamentals.

Saxo Bank’s Head of Equity Strategy Peter Garnry says the third quarter of 2015 will be remembered as the big wake-up call as global equities spun into their most violent period, measured by the first and second derivative of volatility, since the 2008 financial crisis. Developed-market equities are down 6.2% for the quarter but emerging-market stocks are brutally down 16.2%.

Garnry believes strong underlying forces in many emerging markets are transforming themselves from pure export-driven and commodity producers into more balanced economies with more growth coming from domestic consumption as the middle class grows. The transition is already happening, and capital will flow back into emerging markets as soon as there is clarity over the trajectory of US rates.